You put a glass of water on a record turntable and begin slowly increasing the speed. What happens first? Does the glass slide off or tip over, or does the water splash out?

The simple answer is: it depends. The factors governing this equation are the glass’s center of gravity, the radius from the glass to the center of the turntable, and the static friction force.

Imagine a small amount of water in the glass. This sub-volume of water experiences two forces: 1) gravitational force pulling down on that small mass of water; 2) the force of centripetal acceleration acting upon that small mass of water. When viewed in the (rotating) reference frame of that tiny volume of water under study, the centripetal force is a side-acting force and the gravitational is downward acting. The surface of the water will change to a shape that is NORMAL to the resultant vector of those two forces. Holding rotational freq constant, the water angle will get steeper as its radial location on the record player increases, because the centripetal force is proportional to radius multiplied by the SQUARE of the angular frequency. It can be shown that the water will take on the shape of a sub-portion of the surface of a PARABOLA centered with its minima at the center axis of the record player. As the angular frequency increases, the glass will either slide, or it will tip over, and which of these depends on the aspect ratio of the glass (position of COG) and the friction between the glass and the record player. Some water could splash out prior to either of those events, if the glass was nearly filled with water before the water angle started to change when the turntable started spinning 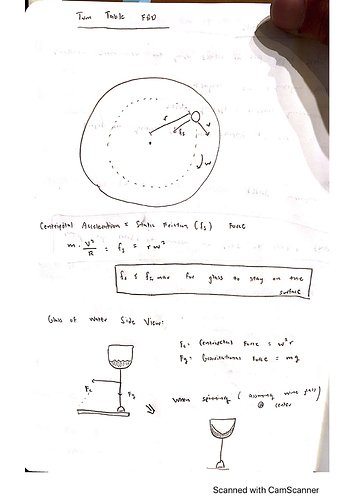 [You put a glass of water on a record turntable and begin slowly increasing the speed. What happens first? Does the glass slide off or tip over, or does the water splash out?]1239×1754 265 KB