If I have a solid rod and hollow rod with the same mass and I let them roll down a ramp, which one reaches the bottom first and why? 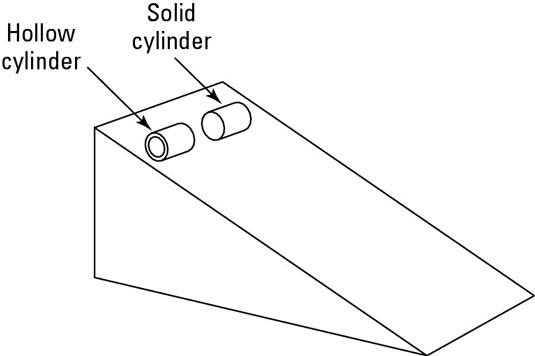 When an object is rolling down a ramp, its energy is made up of three components:

The first term is the potential energy; this is the energy is takes to lift the object up the ramp. This is equal to 𝑚𝑔ℎ with 𝑚m being the mass, 𝑔 the acceleration due to gravity, and ℎ the height of the ramp.

The second term is the translational kinetic energy; this is the energy it takes for the object to move down the ramp.

The third term is the rotational kinetic energy; this is the energy it takes for the object to roll. This is equal to 1/2𝐼𝜔^2, with 𝐼 being the moment of inertia (the object’s resistance to being rotated) and 𝜔 being the angular velocity.

If you want to practice more questions like this, check out these other moment of inertia problems!

Here are some other tricky questions:

I think they should reach the bottom at the same time